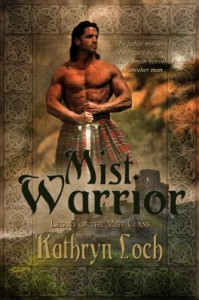 Mist Warrior is the first book in the Legacy of the Mist Clans series. This is not my first time entering a world created by the author so I had high expectations. The story did not disappoint.
Mist Warrior is a story of loss, love and revenge.

Witnessing his mother’s death at the hands of the man whom he believed was his father could not have been easy for Brenan. Then to make the situation worse he learnt that the same man murdered his biological father. Filled with rage Brenan is on the run as his enemy was determined to end his life and steal his legacy. His journey took him to his father’s land in Scotland. After 10 years of being on the rum, the time came for him to return to England and reclaim his birthright. However, tragedy and mayhem greeted him on his return and he found himself thrust into what would become greatest battle of his life.

I loved this story. Well written and engaging, which came as no surprise. I had difficulty putting it down. The descriptive details as it relates to the medieval times, the characters, the language, customs, and the battles had me turning the pages.

I enjoyed the romance, but I was disappointed with how it worked out in the end. The heroine (Catriona) was betrothed to someone else while in love with the hero (Brenan). The journey to their HEA was rife with jealousy, angst and danger.

The characters helped to drive the story. I admired Catriona for her strength, devotion and her archery skills. She is strong willed, a trait her betrothed despised. He underestimated her ability to take care of herself and tried everything to make her feel inferior, but he failed in his attempts. She carries the guilt of her parent’s death as she felt she did not do enough to save them. She saw Branan has her means of getting justice and she willingly accepts her betrothed treatment to see this happen. There were times, however where she acted like a whiny child and It was those moments I wanted to shake her. Thank goodness, these occurrences were rare.

Branan has a temper, which was fueled by his need for revenge, which he needs to keep under control or he risks becoming like his stepfather. He despises men who abuse women and occurrences like these fuel his anger. It was a stark reminder of what his mother endured prior to her death.

The secondary characters added provided great support to hero and heroine, whether as a friend, a loyal servant, bodyguard or enemy.

Narration
Brian J Gill narrated the story, and I thought he did an excellent job. He voiced both genders and the Scottish accents well. I would definitely listen to more of his work.

Conclusion/Recommendation
A good listen and I look forward to listening/reading the next book in the series.