BOOK REVIEW: A PINOT NOIR TO DIE FOR by WAYNE KERR @waynekerrnovels #Mystery 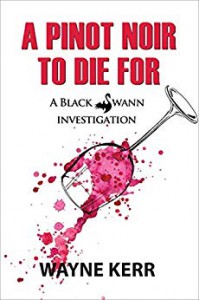 Basking in the glow of clearing her name of a murder charge, with a book deal under her belt, Reggie Swan has become the most sought after private investigator.
Despite this. Reggie still struggles with her reintegration into a life outside of prison. Social Media, smart phones and all the latest technology proved a challenge, but the one thing that has not changed is her ability to solve a crime.

In this installment, Reggie has quite a few cases on her plate, but none has challenging has the case of the Trans Canada killer. All that would change when the lead singer of one of Canada’s famous rock bands, Aurora, was found drowned in a vat of wine in his winery. The coroner ruled his death an accident, but his wife refused to accept this and requested the help of Reggie to solve her husband’s murder.

Based on my experience with Dead Ringers, I was looking forward to a good mystery. The mystery was not bad, in fact I took a while to figure out the identity of the murder. The victim had many enemies, making the suspect pool large. My issue is with the fact that a small portion of the story was dedicated to this case. Despite this, the story kept my attention and had me turning the pages.

Parts of the story focused on an identity theft case. We also see a Reggie finding love. I enjoyed this aspect of the story as much as the mystery element. After all she had been through, she deserves happiness. Both elements combined provided an entertaining read.

Conclusion/Recommendation
Overall, A Pinot Noir To Die For is a great addition to the series. Although I preferred the first book, this was still an enjoyable read. I am excited to get my hands on the next book in the series. I would recommend this series to fans of the mystery genre.


I received an advance review copy free via Book Sirens, and I am leaving this review voluntarily.