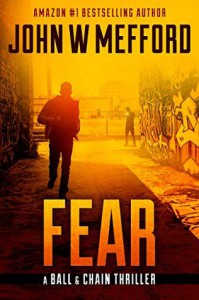 Fear by John W. Mefford is the second book in the Ball and Chain series. Although it features a different case, it is recommended that the books be read in order of release, as this will allow readers to follow the lives of Willow and Cooper. I enjoyed book one and looked forward to spending more time with the characters.

I liked this installment, but it did not have the wow factor I expect from the author. The excitement was missing. It took some time for me to get into the story. The first 40% focused on the events in the character’s life since the first installment. There were hints of nefarious things happening but that aspect of the story did not develop until the 40% mark. Just when I thought things would take an exciting turn, the story tapered off, and the focus was on Cooper and Willow’s personal issues, than on their investigation into the missing athlete. There was a moment during these events where I found myself on the edge of my seat. This was because of the loan shark/mobster who wanted to keep Cooper under his thumb. Meanwhile, someone is kidnapping persons whom they perceive to be racists and torturing them, but it was not until 80% into the story that this thread took life.

Cooper is juggling several things in his life. A nosy neighbor, a loan shark, his feelings for Willow and a cop who wants more than friendship and the investigation. Meanwhile he is trying to revive his career as a sports writer. Willow and Cooper have yet to come to terms with their feelings for each other.

I loved the interaction between Willow and Cooper. From their cheesy banter to the dangerous situations they find would themselves in. Their chemistry was undeniable, but past and current events proved a hindrance.

The story had several plot threads with an interesting cast of characters.

Conclusion/Recommendation
Despite this not being my favourite by the author I still liked the story and I am curious to discover what is in store for Willow and Cooper.