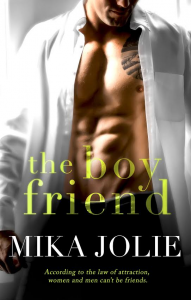 There is an age-old argument that says men and women cannot be friends without crossing the line between friends and lovers. Dean Morello thought whoever came up which such an idea was dead wrong.

Dean’s best friend is a woman named Coriander (Cori) Phillips. They have been friends ever since the day he pulled her pigtails and her response was to punch him in the gut. Twenty-three years later their friendship is as strong as ever, but it is about to face its ultimate test. When Cori announced that she wanted a baby and everything that came with it, Dean knew then that things would never be the same if she is successful in finding the one who could fulfil her desires. It did not help that he found himself having sexual fantasies about her. However, that was one line he was not willing to cross and besides nothing is wrong with having fantasies. Cori is hot, so any red-blooded male would have fantasies about her. He, however, would start to view things differently the night they shared their first kiss. Will they explore this intense attraction and risk their friendship or will they deny their feelings to preserve the very thing they hold dear?

When a story has you laughing from the first page, you know you are in for a treat.
‘OKAY, HERE’S THE DEAL, I’m going to share my story with you. Let’s get a few things out of the way. There’s going to be sex. Some details might be a bit explicit. I curse like a motherfucker. The plot will be a little wonky and will not always follow some forced narrative. Sure, there will be conflict, climax, resolution . . . Bullshit, bullshit, bullshit. But don’t expect me to be a fucking Prince Charming. I’m the tall, dark, and handsome Casanova the nuns warned you about. Hearts will be broken. Tears will be shed. Friendship will be tested. Eventually, I’ll realize the mess I’m in isn’t fictional, and I’m the motherfucking star of my own story. With me so far? Okay. Grab a Pinot Grigio, a warm fuzzy blanket, and join me on this wild ride. Explicitly Yours, Dean Conrad Morello.’

With a beginning like that, who would not want to read more? I sure did. The story held me captive and putting it down proved difficult. The more I read, the more entrenched I became in the Dean’s and Cori’s relationship.

The story was told entirely from the Dean’s POV, which I found refreshing and realistic. Seeing everything unfold through his eyes and his reactions, as a result, made it easy to understand to relate to him. At first, he may come off as an unlikeable character due to his man whoring ways, but as the story progresses, his true nature, that of being a devoted and caring individual shines through. However, it would have been nice to get the story from Cori’s perspective as well. Because I only got Dean’s perspective, I never got a handle on how she actually felt.

I enjoyed the banter between the characters; it was fun, sexy heartbreaking and entertaining. The manner in which the author portrayed Dean's struggles with his feelings for Cori made the story seem that more authentic. In addition to the humorous interaction between the characters, I also enjoyed how the romance developed. It was well written and as a result, it made it easy to connect with Dean and Cori as a couple.

This is not my first time reading the author’s work. Therefore, I have some experience with her writing style, which is vivid, thereby making you feel like you are a part of the story. This story was no different. What I enjoyed most is the way the narration was executed. The author had the male protagonist speaking directly to the reader. Her writing had a great balance of wit, sass, and emotion.

I am not a fan of stories that are filled with unnecessary drama. Thankfully, this was not the case in this instance. It had the right amount of drama, humour and angst combine to make for an entertaining read. The pacing was perfect and I never had the chance to be bored. I kept flipping the pages as I was eager to discover how things between Dean and Cori would unfold.

Verdict
'The Boyfriend' is a great story with great characters and a beautiful storyline. If you are looking for a swoony, addictive romance with just the right balance between angst, heartbreak, and hilarity, with light-hearted banter, a sexy love story, then you need to try this book.